Welcome to the wondeful and ridiculous world of Linux Tycoon! For DOS!

The original version of Linux Tycoon was written (for Linux, Windows, and Mac) as a bit of a goof.

This is the DOS version, written entirely in Visual BASIC for DOS.

Also as a bit of a goof.

A game. Where you simulate running a Linux Distribution project. In DOS.

Because there's just one file.

And it can live anywhere.

= Version 0.9.2
- Totally forgot what was in this version.
- Released it years ago.
- Probably lots of cool features and stuff! 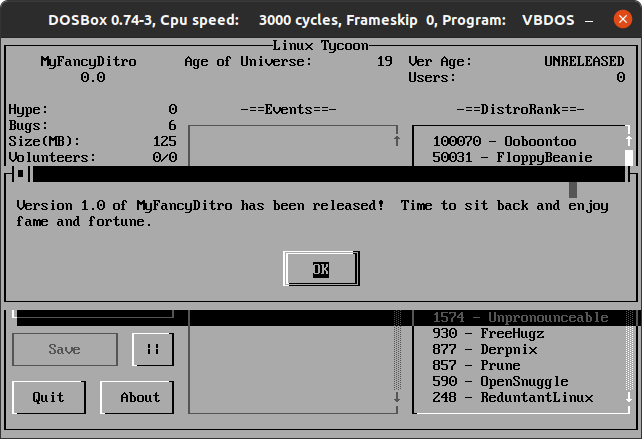 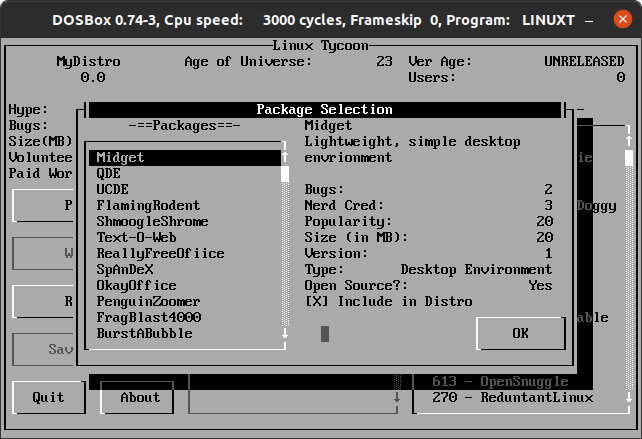 8
View All
4
Share Reply
Interested? Want to learn more about the community?
More from Lunduke
Scott Loveless@sdloveless
2 hours ago
I've always liked the idea of running OpenBSD on my personal machine. I'm fairly ignorant about the nuts and bolts, but again, I like the ideology of the project. Today, I found this: https://www.c0ffee.net/blog/openbsd-on-a-laptop/

Also, Theo once called someone a "slack-jawed drooler" on one of their mail lists. Which made him my hero.

2
View All
18
Share Reply
Edward Willis@encw
3 hours ago
#SundaySounds I tried to post a Weird Al video but playback was broken because ol' Al disabled playback off of YT :(.

So here is another song.

Bryan Lunduke@Lunduke
July 20, 2020
Welcome to Lunduke.Locals.com!
In order to post or comment, you'll need to become a paying member. This supports the work I do -- and also keeps out the riff raff. ;)

Oh, and nerdiness is encouraged. The nerdier the better.
72
View All
15
Share Reply
Don’t have a Locals account yet? SIGN UP
I’m already a member Log in
Please keep this window open while your file is uploading...